The childhood ritual that would culminate in Pop-Tarts typically began at a Chicken Holiday off the Jersey Turnpike. See three of us under fluorescent light: my father, my younger sister and me. The table is a tangle of grease-sod napkins, the room humid with flash-fried air. Above us looms a cartoon hen in a party hat.

My sister and I are drunk on chicken skin, eyes bleary from ogling the cranes over Port Elizabeth, robot dinosaurs. Behind dark sunglasses, my father lays plans and we consume them. There will be the drive into the mouth of the Holland Tunnel, the men who backflip across Washington Square Park weightless. There will be dirty-water dogs with mustard — never ketchup — and Central Park playgrounds that smell a bit like pee.

But first, there will be Pop-Tarts.

And then there are Pop-Tarts, eager in their boxes, practically shaking off the shelves. Pick me, they scream, morning cheer promised in confetti shades of berry. A taste so cool, so cool they’re hot. Our synapses fire in the cadence of Saturday morning cartoons.

But here’s the thing: Pop Tarts were a lie.

Pop-Tarts were feral breakfasts, my sister and I left to our own devices in my father’s Bayonne walk-up. Pop-Tarts were the anti home-cooked morning, rainbow crumbs forming snowdrifts at our feet. Pop-Tarts weren’t scrambled eggs and Wonder Bread toast and squeezing onto the couch all three of us. Not even close. Sticky sweet hid inside silver Mylar dresses.

With this as backdrop, I’ve watched these mass-baked breakfast tiles colonize my social media feeds of late with a ho-hum. Prom-queen bacon makes her debut. The digital crowd goes wild. Now we’re on to soda flavors, but not for me.

Still, the mania has left me wondering. Am I missing out? In the box: no. That pastry ship has sailed. But could a homemade version make my heart…pop? So began my personal Pop-Tart trail, a sugar-laced route across the Mid-Atlantic. I would find spots peddling butter and whimsy. I would savor tarts crafted by hand. Some didn’t make the cut. A profusion of sprinkles, overeager, leaves a whisper of food-grade wax – acceptable only in lips or mustaches. Too much icing is a toothache. But when Pop-Tarts are done right?

No Pop-Tart trail worth its sugar can ignore Ted’s Bulletin, so I begin in DC, clad in stretchy clothes. 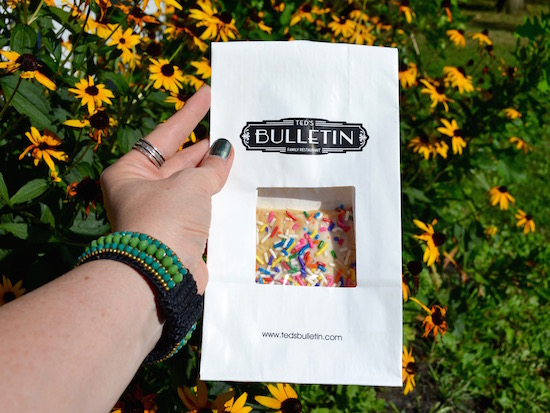 At Ted’s, I’m greeted at the door with throwback soul: “So if you feel like giving me a lifetime of devotion…” Hold up, Smokey Robinson. We’re just getting started. Ted’s retro flair is all gold tones and deco, vintage with a wink. Lucy and Ricky bicker on the walls. Waiters deliver comfort feasts. It’s my kind of place — and filled to the brim with Pop-Tarts, to the tune of thousands per week.

“We definitely have regulars who pop in for their tart,” quips the guy who gathers mine from behind a fantasyland counter: blueberry cheesecake, strawberry, brown sugar cinnamon, salted caramel. (What? It’s research.) My Pop-Tart baseline is set. They should be:

1. Fun, color and flavor bright
2. Made with love, the tines of an unseen fork rendered visible
3. Incompatible with regret

Ted’s Tarts are classic in style, but amplified — easy to carry and eat. Ah! Are Pop-Tarts a precursor to adventure, to wandering days fueled by sweets? Had I missed the point?

This little number is different. Her icing skirt is freshly pressed, clean lines drawn on golden crust. Her sprinkles are tiny orbs, glistening. Blueberry jam rests between layers, exposed. This is a ladylike Pop Tart, if you will.

It also raises canonical concerns. “This tastes more like a cookie,” my husband says, “though that’s not a criticism.” But can a cookie bar even be a Pop-Tart? This may not be the Pop-Tart- iest of the bunch, but it disappears.

I’m descending into a rainbow spiral. I clutch my belly and the sun screams. Oh, Nutella, you say? Well, since I’m here… I grab my order from a cute barista, who warns: “Be careful. These tend to migrate.”

In my sugared state, I assume she’s referencing a roving gang of Pop-Tart thieves, known throughout DC. You’re distracted for a moment, and poof! Really, they just slide off the plate.

Another one pushing the Pop-Tart boundary, this is pain au chocolat’s sassy cousin. Puff pastry is stuffed and topped with Nutella. It is insanely rich, not too sweet. Have I mentioned Nutella? I leave with buttery flakes on my phone.

Leaving DC, I mourn the lack of savory Pop-Tarts. I crave one jammed with veggies. My husband eyes me. “I think you just want a salad.” Still, my sweet tooth is coming in nicely.

A perk of this trail is pairing Pop-Tarts with adult beverages, an option unavailable at age eight. Why yes, I would like a Jailbreak Hefeweizen, merci. Regarding Pop-Tarts, our bartender is decisive: we will have brown sugar, warmed.

What arrives is a revelation. This Pop-Tart is bigger than my head…and hot…and topped with whipped cream. Molten sugar goes gooey inside. The crust is butter-drenched silk. This Pop-Tart wants to cuddle, is a valentine on a plate. It reminds me that I never toasted them. Grave error. Could those long-ago breakfasts have been saved?

Fast-forward to pure adulthood. Corner Pantry is “Sexual Healing” and ladies
who lunch and mod British styling. It is warm banana-Nutella with streaky glaze. Can I say I love you? Is it too soon? These tarts are adult-sized, which in Pop-Tart parlance signifies smaller — roughly half on the Kellogg’s scale. I accept this as advantage and eat the entire thing, shameless.

Dazed, we drive on, northerly Pop-Tarts our guiding star. The trail’s midpoint is home, henceforth dubbed the Pop-Tart danger zone. At night, I eat cherry tomatoes like candy. 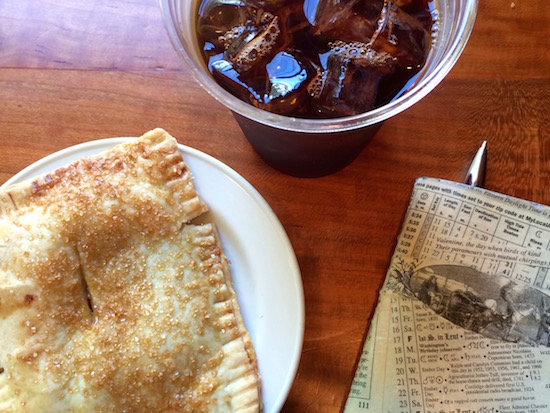 This is the Pop-Tart next door, dangerously nearby 24/7. At the counter, a cartoon Pop-Tart beckons, dancing merrily. Peach-filled pastry comes dressed in raw sugar, earthy alternative to sprinkles. More than 20 Pop-Tarts fill the rotation here — handmade with a custom pastry cutter. I eat and write to an electronic soundtrack, savoring sunshine vibes. Eventually, only a constellation of sugar remains.

Next up Double Knot, where Pop-Tarts come paired with hand pours and caffeinated cocktails, with mouthwatering breakfast bahn mi. As I break mine open, a blueberry rolls – rolls! — onto my plate. Befitting a spot that shape shifts into an izakaya by night, sprinkles are handled with restraint.

My husband thumbs a vintage tome, pulled from a shelf of antiques: 1001 Riddles. I offer you #827: “Why is a man committing murder like a hen walking across the street? Because it’s a fowl proceeding…” Giggling, I am transported to my father’s apartment, to his bookshelf where The Shining’s spine shimmered.
This isn’t about Pop-Tarts, I realize — not really. Sugar may impair memory, but this is about preserving it. 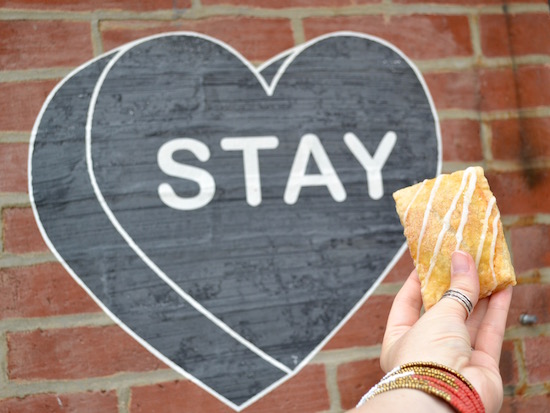 When hunting Pop-Tarts, you can’t trust the Internet. We strike out in two places before landing here and I almost bail. Luckily, my fearless Pop-Tart partner urges me on and we walk from Center City to Northern Liberties, a blessing of burned calories.

One Shot’s scratch tarts live in glass domes, flavors marked on handwritten tags. They’re topped with a sugar-cinnamon cloud; filled with apple and strawberry. They’re delicious and I want another, though I refrain. We eat outside beneath a charcoal wheatpaste heart as Philly awakens on a Sunday, well past noon. I think about childhood mornings, about afternoon footsteps on paved city streets.

Pop-Tarts have claimed undue space in my diet, but I press on towards trail’s end, if a bit sluggishly. Driving up the Turnpike, much remains the same; only I’m the one behind the wheel. To my right, the robot dinosaurs still groan, ever hungry.

My brother guides me to this room of exploding color and hissing espresso machines, purveyor of Sweet Generation treats. It is New York without pretense, come-as-you-are. It is the city I discovered wide-eyed as a kid, everything at once.

My PB&J Pop-Tart arrives with wink and smile as “Mother Te-Reese-a” gazes from a brick wall, peddling lattes. Red sprinkles have been crushed slightly in transport. Writers scratch verses and the line threads between them. People connect and seek isolation in shared space. Memories hide in the corners, just out of sight.

Megpies – AKA “pockets of joy” – took over New York from a Brooklyn stoop. These days, they’re everywhere thanks to Starbucks. Are they still handmade? Who
knows? I order a strawberry tart nonetheless and amble to Washington Square Park, claiming a bench in the shade.

A saxophone hums from beyond my sightline and rainbow crumbs gather on my skirt. Men play chess and folks flaunt summer skin, the tourists ever-circling with cameras. The scene plays out as it always has, a riot of humanity. I eat and watch and it’s imperfectly perfect: strawberry jam and bittersweet.